Gut Bacteria May Cause Rheumatoid Arthritis 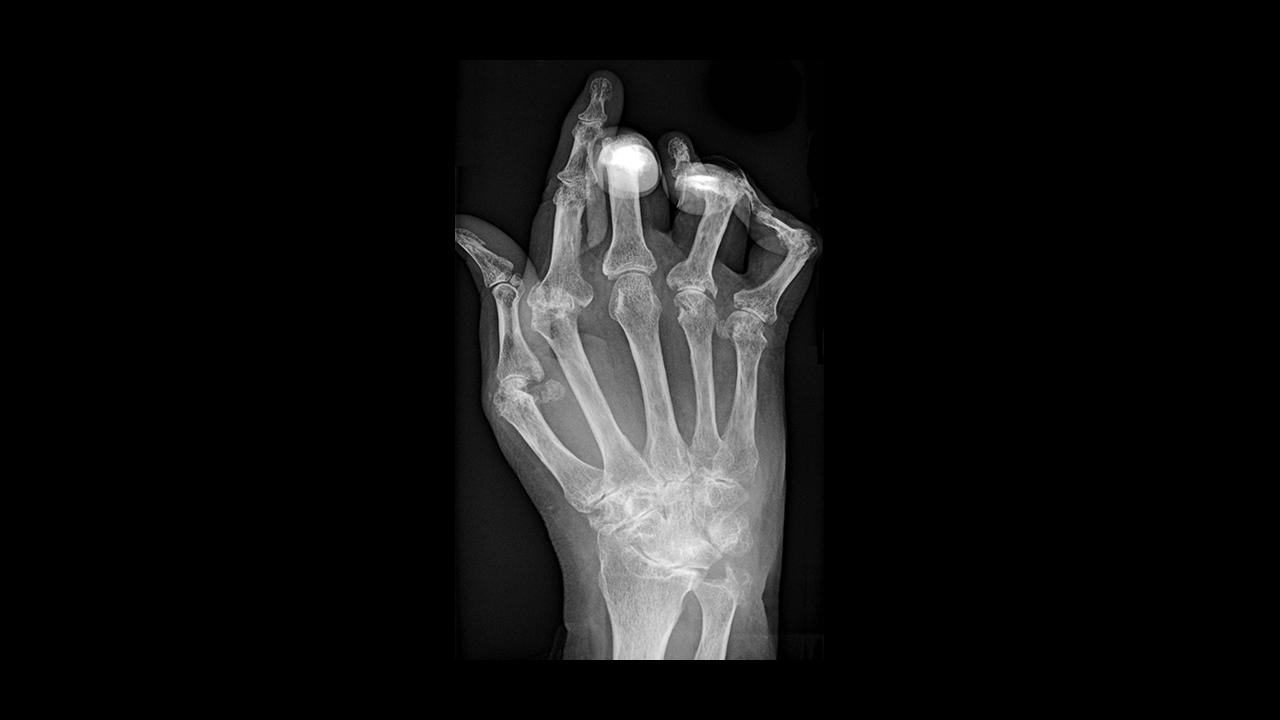 The bacteria that live in your intestines are a mixed blessing. Scientists have known for decades that this so-called microbiota helps us digest our food and crowds out infectious germs. The bugs have also been implicated in allergies and obesity. Now, a new study adds one more potential malady to the list: rheumatoid arthritis.

"It's been suspected for years and years, both in humans and in the animal model, that the development of autoimmune diseases like arthritis is dependent on the gut microbiota," says immunologist Diane Mathis of Harvard Medical School in Boston. Now, she says, those suspicions are beginning to be confirmed in humans. "It's a very striking finding.”

Rheumatoid arthritis is a mysterious disease. It can strike at any age, typically beginning in young and middle-aged adults and causing painfully stiff, swollen joints in the hands and feet. It can also destroy bone and cartilage and damage organs like the lungs and kidneys. Scientists aren’t sure what causes rheumatoid arthritis, but they do know that it’s an autoimmune disorder, meaning that the body's immune system is attacking its own tissues. And that's where gut bacteria come in

Gut bacteria have an intricate relationship with our immune system. We need to be able to tolerate helpful microbes while still recognizing and fighting invaders. Immunologist Dan Littman of New York University knew that gut microbes are important to the development of a particular type of immune cell his team studies, known as a Th17 cell. Mice that are reared in sterile conditions produce very few of these cells, and his group had previously found that mice bought from one supplier had far more Th17 cells than those that came from a different supplier. The difference turned out to be due to the rodents' gut microbes.

When Littman presented that result at a conference several years ago, Mathis, who was in the audience, told him that she had seen a change in her lab animals when they were moved to a lab in a different town. Instead of spontaneously developing a mouse version of arthritis, they remained healthy. Littman and Mathis collaborated to find out why and tracked down the difference to a particular type of bacterium that, when present in the intestines, trains the immune system to produce Th17 cells, which in turn release molecules that cause inflammation and bone damage in arthritis.

Littman wondered if rheumatoid arthritis in humans might also be due to specific gut microbes. His team tested fecal samples (which reflect the population of gut bacteria) from 114 residents of the New York City area. Some subjects were healthy; others had been living with rheumatoid arthritis for years; still others had psoriatic arthritis, a different autoimmune disease whose causes are also unknown; and some had been recently diagnosed with rheumatoid arthritis. Members of this latter group were especially important because, although they had rheumatoid arthritis, they hadn't yet been treated for it. In this group, a bacterium named Prevotella copri was present in 75% of patients' intestines, the researchers will report online tomorrow in eLife. P. copri only appeared in 37% of patients living with either rheumatoid or psoriatic arthritis and 21% of healthy controls. This last number is similar to the prevalence of P. copri that previous studies found in the general population in industrialized countries.

"That they were able to associate one bacterium with one pathology is remarkable," says Yasmine Belkaid, an immunologist at the National Institute of Allergy and Infectious Diseases in Bethesda, Maryland, who was not involved in the work.

But the results aren't enough to convict P. copri as the mastermind behind rheumatoid arthritis, she notes. The authors can't ethically give the bacterium to healthy subjects, so they couldn't prove that P. copri caused arthritis in patients, just that the bacterium and the disease tend to occur together. Genetics and other environmental factors, like smoking, have been associated with rheumatoid arthritis, so even if P. copri is the culprit, it doesn't necessarily act alone. "The next step is to be able to understand how causative these microbes are," Belkaid says. That would require surveying people's microbes and waiting to see who develops the disease.

To build its case against the bacterium, Littman's team gave a lab-grown strain of P. copri to mice and watched what happened in the rodents' guts. P. copri easily took up residence, and the researchers found that the mice developed increased inflammation, especially in the gut. They didn't get arthritis, possibly because the strain of P. copri was different from the human ones, but Littman says the gut inflammation corroborates the idea that gut microbes are prodding immune cells to develop and that those cells then go forth and lead an attack on other parts of the body.

That is the most exciting possibility, Mathis says. But, she explains, other hypotheses can't be ruled out. It's possible that arthritis patients' immune systems allow P. copri to grow out of control, or perhaps a third factor affects both the microbes and the immune system independently. Rheumatoid arthritis, Littman says, seems to have several environmental triggers, but how and whether they combine is not well understood.

The findings, Mathis says, open the possibility of new therapies to prevent or treat rheumatoid arthritis. Current treatments for the disease include drugs with scary side effects—Remicade, for instance, seems to increase the risk of developing certain cancers and serious infections. Perhaps P. copri could be attacked with antibiotics, Littman says, or crowded out with probiotic pills full of good bacteria. Either way, patients may someday be able to relieve their joint pain by focusing on their guts.